The highly-acclaimed culinary trio, who are longstanding champions of the event, are joined by a Who’s Who of more than 60 chefs from across the country for four days of festive celebration – Padstow style.

The chef demonstrations in the Sharp’s Chefs’ Theatre and on the Festival Stage, are spread across the four days of the festival. They’re a unique opportunity for some of the country’s best chefs to share their recipes and cooking tips. 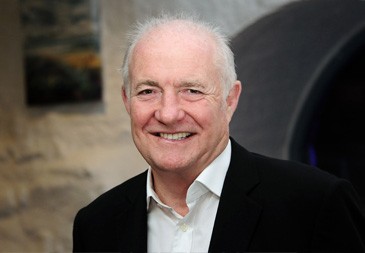 Rick Stein CBE is an English chef, restaurateur, cookery book author and television presenter. He has written over 20 cookery books, an autobiography and made over 30 programmes including 12 cookery series. He has also cooked for The Queen and Prince Philip, Tony Blair, Margaret Thatcher and French President, Jacques Chirac.

Rick is best known for a love of fresh seafood and made his name in the 90’s with his earliest books and television series based on his life as chef and owner of The Seafood Restaurant in Padstow, which celebrated its 40th anniversary in 2015.

Since then he has expanded his horizons to cover numerous journeys over the world in search of great dishes, and also increased his business empire.

In January 2019, the BBC announced Rick would be returning with a new series and accompanying book in the autumn, celebrating Secret France. 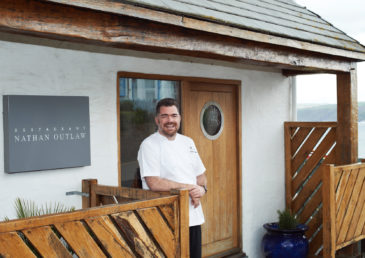 Originally from Kent, Nathan now calls Cornwall his home and is a proud ambassador of all things Cornish. His style of cooking is one of simplicity but with complex flavour combinations using local, seasonal, responsibly sourced ingredients. Nathan was proud to be named the AA Chef’s Chef of the Year 2014/15, Restaurateur of the Year 2017 at The Catey Awards, and Chef of the Year at the Food & Travel Awards 2017.

Having attended Thanet College in Kent, Nathan worked with several chefs including the late Peter Kromberg, Gary Rhodes, Eric Chaviot and John Campbell. However, his love for seafood cookery was ignited when he came to Cornwall as a young chef to work with Rick Stein.

Nathan currently has two restaurants in Cornwall. In early 2015, Restaurant Nathan Outlaw relocated from Rock to the historic fishing village of Port Isaac and retained its two Michelin stars. It was awarded the number 1 spot of the ‘Top 50 Restaurants in the UK’ in the Waitrose and Partners Good Food Guide 2019, for the second consecutive year having scored a perfect 10 for cooking for the past three years. Outlaw’s Fish Kitchen, also in Port Isaac, offers diners small plates of seafood in an informal setting. It holds one Michelin star.

In London, Nathan’s latest venture, The Goring Hotel in the heart of Belgravia, opened in June 2019, bringing the very best of sustainable Cornish seafood cookery to London.

Nathan actively supports the education and training of future chefs and front of house staff, often taking time to work individually with younger members of staff. He is also in demand at industry conferences in Britain and abroad, where his expertise is valued both by those training, and by experienced chefs.

Nathan’s easy manner, enthusiasm and obvious passion for his work make him a hit with audiences of all ages and he regularly appears on TV programmes such as Saturday Kitchen and MasterChef: The Professionals. 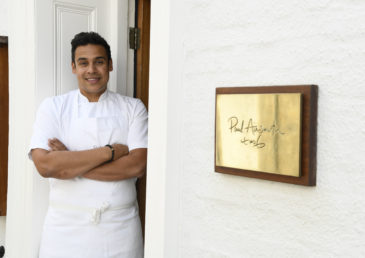 Paul Ainsworth was literally born into the hospitality industry. Growing up in and around his parents’ guesthouse in Southampton, he developed a strong sense of hard work and passion to succeed. Before he had even reached his teens, he had six jobs on the go. On leaving school, Paul studied catering and hospitality at Southampton City College, working locally at The Star Hotel, and Careys Manor in the New Forest where he enhanced his passion for learning.

In 1998, Paul achieved his first big break when his college tutor helped him to secure a job at Gary Rhodes’ Michelin-starred Rhodes in the Square in Pimlico, London. After two fulfilling years, Paul moved on to work with leading British chef Gordon Ramsay at his eponymous, three-Michelin-starred restaurant in Royal Hospital Road. Whilst working at the restaurant, Paul was part of the team that successfully achieved three Michelin stars, one of his proudest moments to date. An opportunity to work for fellow Gordon Ramsay chef, Marcus Wareing, at Petrus in St James’s arose in 2003, and Paul relocated to the Berkeley with him later that year.

After six years with the Gordon Ramsay Group, Paul was invited to head up the kitchen of No. 6 in Padstow. Three years later, in 2009, Paul and his wife Emma took over the restaurant from their business partner Derek Mapp and relaunched it as Paul Ainsworth at No. 6. The following year, Paul and Emma acquired Rojano’s (which was originally opened in 1974 by local businessman Stanley Rojano), and, with a nod to mentor Gary Rhodes, relaunched and renamed it Rojano’s in the Square. In 2015, the couple launched their most ambitious project to date, Padstow Townhouse. The 18th century building has been lovingly restored by Emma and interior designer Eve Cullen-Cornes, helping to cement Paul and Emma’s positions as celebrated restaurateurs and hoteliers.

A passionate supporter of local farmers, fishermen and artisanal producers, Paul’s fun and inventive cooking has held a Michelin star since 2013, and in September 2016 was awarded a fourth rosette by the AA. In April 2018, Paul won the ‘Best Chef’ category at the GQ Food & Drink awards, and Padstow Townhouse, which offers six spacious suites with luxury bathrooms, a kitchen pantry and honesty bar, and in-room spa treatments, has recently been awarded five AA gold stars for accommodation. In July 2019 Paul celebrated two prestigious wins at The Cateys for ‘Restaurateur of the Year – Independent’ and the ‘Chef Award’.

Paul appeared on BBC2’s Great British Menu in 2011 and won the south west regional heat, which resulted in him serving his dessert at the final banquet at Leadenhall Market, London. He has since appeared on Saturday Kitchen, MasterChef, MasterChef: The Professionals and James Martin’s Saturday Morning. In 2018 Paul co-presented BBC1’s The Best Christmas Food Ever which saw Paul share his favourite Christmas recipes and cook for a number of celebrity guests.

In May 2019, Paul and Emma reopened The Mariners in Rock, Cornwall, unveiling a new menu and interiors, following Nathan Outlaw’s departure. June 2019 saw Paul and Emma launch Mahé, their first cookery school and chef’s table in collaboration with friend and colleague John Walton.